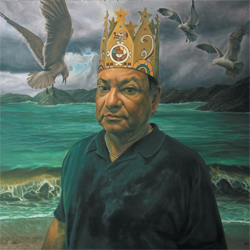 Posted at 21:55h in Chicano Art by Cheech Marin

Menudo: Chicano Art from the Cheech Marin Collection –  Art Museum of South Texas in Corpus Christi, Texas • September 17, 2009 to January 3, 2010: This exhibition features the work of Chicano and Chicana artists from
performer Cheech Marin’s private collection. Included are paintings,
drawings, and prints by Carlos Almaraz, Frank Romero,  Shizu Saldamando, Patssi Valdez, and Vincent Valdez. “The word menudo in the title refers to its slang usage – a little bit of this, a little bit of that,’ says Cheech Marin. ‘From my collection, I combined popular works shown in earlier exhibitions with some of my latest acquisitions and others never before publicly displayed.”

Los Angelenos / Chicano Painters of L.A.: Selections from the Cheech Marin Collection – LACMA in Los Angeles, California • June 15 to November 2, 2008: The Cheech Marin collection is notable for classic examples of Chicano art produced from the inception of the Chicano movement to the present, with a concentration in painting from the 1980s and 1990s. This exhibition includes a number of widely exhibited works by such first-generation Chicano artists as Carlos Almaraz, Margaret Garcia, Gilbert “Magu” Luján, Frank Romero, John Valadez, and Patssi Valdez, whose artistic careers began during the Chicano civil rights movement in the mid-1960s to mid-1970s, as well as works by such younger artists as Vincent Valdez and David Flury. Los Angelenos/Chicano Painters of L.A. is a Los Angeles-focused selection of Chicano Visions: American Painters on the Verge, an exhibition of the Marin collection that toured nationally between 2001 and 2007. RADIO INTERVIEW

Chicano Dream: Cheech Marin Collection, 1980-2010 – Musée d’Aquitaine in Bordeaux, France • June 27 to October 26, 2014: As part of the 50th anniversary of the Sister City partnership between Bordeaux, France and Los Angeles, California, a selection of artworks from the Cheech Marin Collection by 30 Mexican-American artists were curated as an exhibition on display at the Musée d’Aquitaine as a testimony to the vitality of movements yet to be discovered in France, and even in the U.S. In reaction to their elders who harbored illusions of integration, Chicano writers and artists in the 1970s responded with a renewed awareness of their roots and the acknowledgement of their history, language, strong multi-ethnicity and multiple inputs: Spanish, Native American, American. The exhibition explored these legacies, while also providing an introduction to younger, more distinctive artists. Concurrently with the exhibition, the Amis du Musée d’Aquitaine Association welcomed American artist John Valadez, a pioneer of Chicano mural painting, for a residency during which he created a 20′ x 14.8′ mural on the façade of the museum. VIDEO

Take 10: The Past Decade of Collecting by Cheech Marin – Mesa Contemporary Art Museum in Mesa, Arizona • September 11 to January 24, 2016: Take 10 draws from the renowned collection of entertainer and arts advocate Cheech Marin, who has amassed one of the world’s largest and most comprehensive private collections of Chicano art. Chicano art is characterized by rich colors and bold, intense imagery that embody and embrace U.S. Latino traditions. Take 10 consists of 42 works in oil, acrylic, watercolor and glass by 33 of the most significant Chicano artists.

Chicana Perspectiva: Margaret García and Patssi Valdez – The Eastern Star Gallery at Archer, Los Angeles, California • October 11 to November 11, 2008: Featuring two of the most vibrant contemporary Chicana artists, Patssi Valdez and Margaret García, this exhibition comprised an empowering presentation of colorful images aimed to open dialogue about stereotypes and to answer the question “What is Chicano art?” Gallery Director Patti Marcus shared, “As an all-girls’ institution, Archer School is thrilled to be hosting an exhibition that displays the power and emotion of two talented women.”